You may be familiar with some of the many spurious but often repeated myths concerning archaic laws that supposedly remain on the statute books. These farfetched claims include the myth that it is legal to shoot a Welshman within the city walls of Chester on a Sunday after midnight. Or you might have heard rumours that a police officer is obliged to allow a pregnant woman to relieve herself in their helmet. Maybe someone you know is absolutely insistent about the existence a longstanding law that makes it illegal to eat mince pies on Christmas day or that it is an act of treason to stand within a hundred yards of the reigning monarch without wearing socks.

While legal myths such as these can be easily debunked this is not always the case. With the general public deriving knowledge about their legal system from hearsay and (mostly American) television programmes it’s not at all surprising that many legal myths have gained common acceptance. The age, complexity and accessibility of our legal system also means that it is not always simple to determine what is and isn’t law. So read on as we debunk eight of the most popular misconceptions in English and Welsh law. 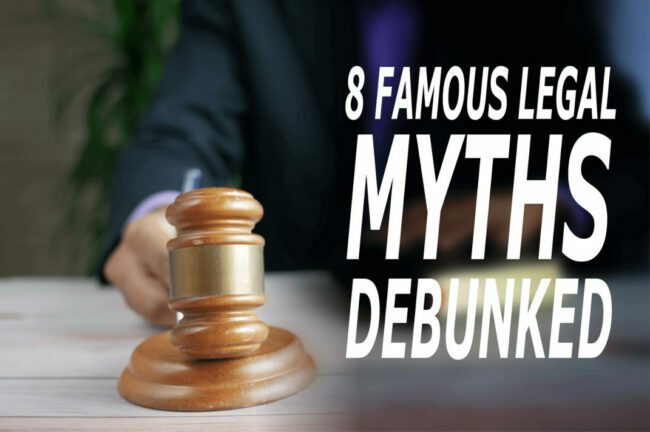 1. It is illegal for someone to take your photo without your consent

Many of us value our privacy and the thought of a stranger taking photos of us without permission may not sit right at all. Surprisingly there is no law preventing anyone from taking photographs or videos of us in a public place. Even if the photographer caught us picking our nose that picture can still be published and spread around the web without our permission. Unless the images which have been taken are deemed to be indecent, no one has the right to force a photographer to stop or delete the photographs.

There are some exceptions to this rule. One exception to this would be taking a photo of a person where they can reasonably expect privacy, such as inside their home or garden. Taking photos in a court, of armed forces, intelligence services and police officers in order to aid terrorism is also banned. Persistent and aggressively photographing someone could also be considered harassment.

2. If I am in a common law marriage I have the same rights as a married couple

It is widely understood to be the case that an unmarried cohabiting relationship gain rights akin to a married couple after a certain period of time. However, the concept of the common law marriage is one of the most enduring legal myths and many in such relationships are unaware that they could be left homeless and penniless if their partner dies or the relationship ends. Worryingly, a 2017 study carried out by Resolution revealed that two thirds of cohabiting couples believed that they were in common law marriages and that this provided them with legal protections.

The Marriage Act 1753 determines that only those who are married or in civil partnerships may rely on the relevant laws and protections. Couples who have not formalised their relationship have no entitlement to any assets including money, home or possessions if their partner dies or the relationship ends. This is likely to become an ever bigger issue as marriages decline and greater numbers choose to cohabit. 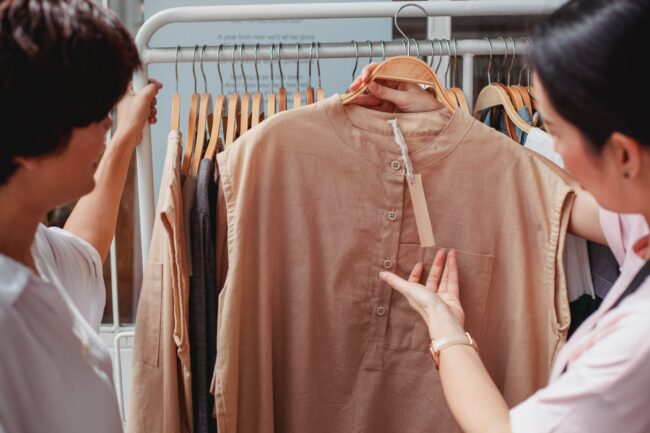 3. A shop has to sell me an item at the price on the label

It is often claimed that if an item is listed for sale in a shop then the shop legally has to sell it to you at that price. This is yet another persistent legal myth. The price on the sticker is what is known as an ‘invitation to treat’ meaning that the business is willing to invite an offer from a customer but this is not in itself a contract. The trader is therefore not bound by the incorrectly priced sticker as long as they tell the customer the correct price before making the sale. The shop may choose to honour the incorrect price as a gesture of goodwill but they are not obliged to do so.

This differs from a situation where a customer is charged more for a product or service than had previously been agreed. One example of this would be if a plumber sent a bill that was unexpectedly higher than the quote accepted. In this situation the trader would be on the wrong side of the law.

4. You can choose to ‘press charges’ if you are the victim of a crime

While ‘choosing to pressing charges’ is a term heard frequently in crime dramas and worryingly in news stories the concept is a complete myth. In reality a victim of a crime does not have any say in whether or not criminal charges are brought about. When a crime occurs you can report it to the police and they can collect evidence but that is all.

Even the police do not have the ability to press charges as this is the jurisdiction of the Crown Prosecution Service who review submissions made by the police and assess the likelihood of a successful prosecution. A victim of a crime may, however, have the ability to choose whether or not to sue the perpetrator in a civil court but these proceedings would be completely separate to any criminal action. 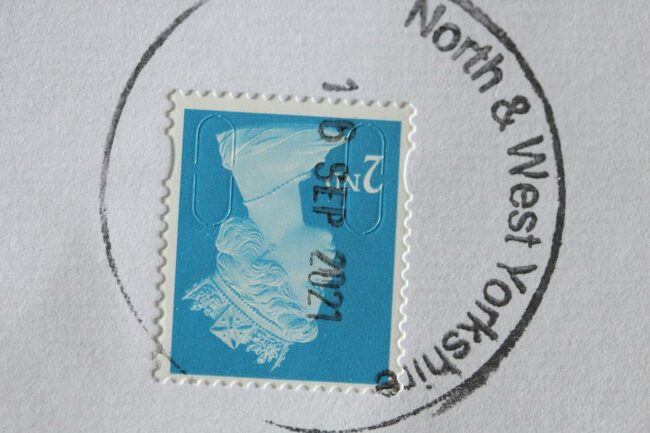 5. Placing a stamp upside down on a letter is a criminal offence

It is a longstanding myth that sticking a stamp upside down on a letter is such a treacherous act of disrespect to the monarchy that it could get you in big trouble with the law. Some even claim that such a transgression could carry the death penalty. While it is true that the Treason Felony Act 1848 makes it an offence to carry out any act with the intention of deposing the monarch the act itself certainly does not refer to stamps.

It is hard to see how this act could prove a threat to the stability of the country and according to the Royal Mail, it is perfectly acceptable to put a stamp upside-down. Thankfully, even if you were to commit a treasonous act you would be unlikely to end up under the guillotine as the death penalty for treason was repealed in 1998.

No one enters a marriage expecting it to end in separation but many couples these days choose to sign a prenuptial agreement in order to prevent uncertainty if things do break down. Many are surprised to learn then that in England and Wales the court is not actually compelled by law to uphold these arrangements. This set us apartment from many other parts of the world including Scotland.

Historically, it was believed that an agreement making provision for separation might encourage breakups. We have to face the fact thought that we live in a society where half of all marriages end in divorce. With this in mind pre-nuptual agreements will be taken into account as long as they meet certain criteria. Judges will assess the fairness of the deal, considering how circumstances have changed over the years, as well as the willingness of the parties to enter into the arrangement. 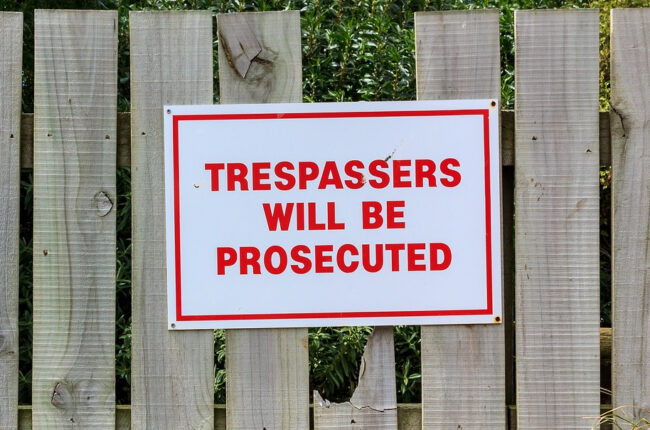 7. ‘Trespassers will be prosecuted’

We have all seen the rather stern signs on private land that threaten to prosecute trespassers. These signs are actually incorrect on two points. The first being that, as we have already learned, a private individual does not have the power to charge someone with a crime, only the Crown Prosecution Service can do this. The second point is that in England and Wales trespassing is not actually a criminal offence.

English and Welsh law generally treats trespass as a civil tort meaning that it is not a matter for the police although it may be possible to issue proceeding through the civil court. Surprisingly it’s not even illegal to park on someone else’s driveway. There are some situation where the police may become involved as there is an offence of aggravated trespass under the Criminal Justice and Public Order Act 1994. This deals with people who trespass and intend to deliberately disrupt a lawful activity or those who are abusive and threatening towards the landowner.

8. Judges bang gavels to restore order in the courtroom

The judge’s gavel is such a prevalent myth that it has become a visual shorthand for the legal system as a whole. It is easy to conjure up an vision of an elderly man wearing a curly wig and banging a gavel while bellowing “Order!”. Such images frequently crop up in new articles, television programmes and films. Many are surprised to learn then that judges in England and Wales do not and have never used gavels in court. The gavel is one of the many legal Americanisms that have gained common acceptance along with witnesses ‘taking the stand’ or ‘speaking to your attorney’.

The United States is just about the only place that you would ever see a gavel in a courtroom and even there it rarely sees use. It is theorised the use of gavels is borrowed from Freemasonry. Many of the founders of the United States were Masons and incorporated several of the secret society’s symbols and traditions into the nation’s rites.